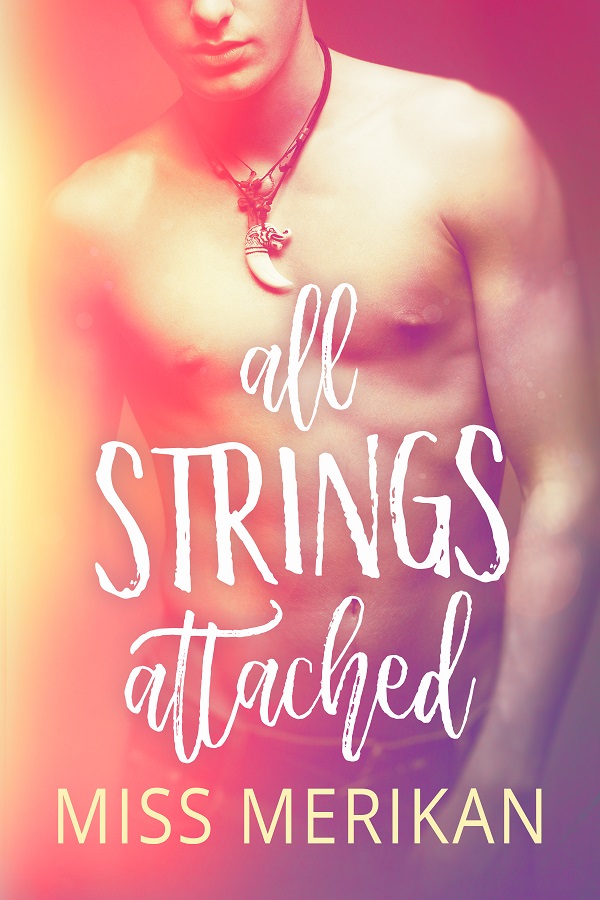 — She found the perfect guy. But he hates her dolls. —

Anna is the weirdest girl Gavin has ever dated.

He lost his arm in an accident, and his mohawk makes him stand out from the crowd, so he’s dated his share of weirdos, geeks, and freaks. Yet no one quite like Anna. She’s cute, hot, and has boobs Gavin wants to bury his face in, but she just won’t shut up about her limited edition Japanese doll collection, or whatever they’re called.

So Gavin comes up with a perfect plan – a no strings attached relationship, so they can fool around without overcommitting. He’d get to have his pussy and eat it too.

Anna thinks she’s met the perfect boyfriend in Gavin, but her pierced and tattooed prince of darkness turns out to be yet another disappointment relationship-wise. When he proposes a friends-with-benefits arrangement, Anna figures she might as well make the best of it and unleash all her kinky fantasies on the guy. After all, it’s not like he’ll be there to judge her in half a year’s time.

WARNING Contains adult content: kinky sex, explicit language. Expect inappropriate behavior on the subway, at a cemetery, and in a room full of dolls.

He lost an arm. He lost the job he loved. And now he was facing the reality of being un-dateable. Gavin’s life was going completely off the rails.

“And then, I messed up the address and sent the customer the normal MSD TenshiDoll Sara head instead of the sleeping version,” said Anna, bombarding Gavin with words as foreign to him as pretty much anything in ancient Egyptian. “She was horrified! She actually thought I opened her doll’s eyes.” Anna kept brushing her pale pink fringe aside as she talked.

Gavin’s eyes kept roaming over the pretty young face framed by hair the color of strawberries with a lot of cream. Her hair color was in stark contrast to her wearing almost no makeup. All Gavin recognized on her face was mascara making her freakishly huge brown eyes look even bigger, and a bit of lip gloss, now smeared slightly over the small piercing under the left side of Anna’s pouty mouth. Didn’t they say people who played with their mouths and talked a lot had an oral fixation? That was the one thing Gavin remembered from Intro to Psychology in college. He would certainly not mind having those cute lips around his cock. At least it would make his date shut up about the freaking dolls.

Was this how low he fell? He loses an arm and all of a sudden he drops to the bottom of the dating pile? Not that he was ever at the top with the amount of piercings in his face, but still … really? A blind date with this girl? Andrea should have known better when she gave him Anna’s number. Sure, technically she was his type: cute, alternative, with big boobs, and at first, Gavin felt certain he had hit the jackpot. Especially since Andrea used to go out with Anna some time ago, and they were still friends.

“Oh.” He managed a small smile, even though he had no idea what the girl was talking about. It’d been all right for the first half an hour. Anna chose a casual Japanese restaurant and seemed strangely enthusiastic about him considering she was an eight, while Gavin wore tons of goth makeup and was missing one of his arms. So from one topic to another, Gavin threw in a casual question about hobbies, and then all hell broke loose. Anna claimed friends knew her as Annashi, or BJA, which Gavin hopefully believed to be an abbreviation from Blow Job Authority … which it wasn’t, and that she made a living off doll modification. That he could understand, but Anna’s interest in toys didn’t lie in the money only. She was a collector, and once she started talking about dolls, she just wouldn’t close her mouth, showering Gavin with words he didn’t understand. He should have known something was up when she complimented his red contact lenses while casually mentioning she’d love to just mix and match eyes without much hassle, ‘just like her dolls could.’

That had to be how Andrea met Anna. She owned several dolls herself. She had them shipped from somewhere in Asia, but considerate as she was, she kept the girly stuff to herself. Anna didn’t seem to comprehend that Gavin wasn’t a doll-loving creep and just kept talking.

“I gave her a refund. I need to keep my customers happy, don’t I?” She flashed Gavin a smile so adorable he almost forgot the topic at hand.

“So, open-eyed dolls are considered better than the closed eyed ones?” Gavin tried with caution. Anna was really cute, so he was willing to put up with a bit of this crap to end the night at her place. Especially because since the accident, any dates he’d had ended on a kiss. If he were lucky. It’s been over a year now, and his self-esteem was hitting rock bottom.

“Depends.” Anna swallowed a gulp of air and made a rolling gesture with her never-resting hand. “Closed eyes MSD TenshiDoll Sara is a LE, so she’s rare and more expensive on the market now that TenshiDoll stopped production. But some companies produce all their dolls in open eyes, half-closed, and sleepy versions. Depends on the preference then. Some even have winking faces! I like them all,” she concluded with a huge grin. Then, before Gavin could stop her, she reached into the pocket of her rabbit-eared hoodie and fished out her phone. “I’ll show you the difference. I love the SD Martin mold so much I got all three face types.”

Gavin hoped Anna wouldn’t see the twitch of his eye. The fuck? Three different doll heads because the eyes were different? Was this a test of what he would put up with for sex? And looking at that phone, he was about to be subjected to photos. Yay! Not.

“This book has such interesting and diverse characters that had me googling all matter of things from ball jointed dolls to one handed condoms!” –Corrine Harris

“To my surprise, I really related to Anna, and I loved her confidence about her sexuality. I also loved the fact that the male MC had one arm and lots of sexy angst.” – Heather K, Goodreads

“I fell in love with Anna the minute she stepped on the scene. I mean really, when she popped up with a strawberry flavored condom to match her strawberry colored hair, who can say no to the girl. (…) It was so OTT and funny.” – TayaJay, Goodreads

“This book has such interesting and diverse characters that had me googling all matter of things from ball jointed dolls to one handed condoms!”

“I fell in love with Anna the minute she stepped on the scene. I mean really, when she popped up with a strawberry flavored condom to match her strawberry colored hair, who can say no to the girl. (…) It was so OTT and funny.”