Sex & Mayhem is a series of novels (both M/M and M/F) about members of outlaw biker gangs. The characters belong to various motorcycle clubs, but while the books are essentially standalones, some of the characters will have brief cameos in other novels.

Tattooed all over, pierced, confident, and hot as hellfire, Zak makes Stitch throw his rules out the window. But as Stitch juggles family, club life, and crime, it’s only a matter of time until it becomes too hard. After a childhood filled with neglect and abuse, followed by his mother’s suicide, Lucifer set out into the world alone. There was nothing for him out there other than taking it one day at a time. As the bastard son of the Coffin Nails club president, Lucifer never got much fatherly love. So when the Nails show up at the strip joint Lucifer works in, the last thing he expects is to be put in the custody of Tooth, the vice president famous for his gruesome interrogation techniques. The man proves to be the sexiest beast Lucifer has ever met. He’s also older, straight, and an itch Luci can’t ever scratch. 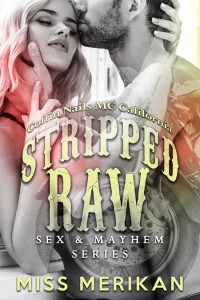 Jolie has a knack for baking delicious cakes, but when it comes to her taste in men, she is a self-professed failure. After a disastrous relationship, she is still picking up the pieces and working three jobs to manage the financial carnage her ex left her with. The last thing she needs is a hot piece of tattooed hunk stomping into her life. Sam, the sexy biker calls her ‘Candy’, but with a talent for being in the wrong place at the wrong time, Jolie should be called ‘Trouble’. Ghost finds out the hard way that people you meet online aren’t always who they seem to be. He believes Zara, a girl he met online is The One, and despite all his friends considering him crazy, Ghost is about to propose. But ‘Zara’ turns out to be Luca, and Luca is most definitely a guy. Yet Luca is the same person with big dark eyes, so desperate for help Ghost can’t help but fall head first.

Luca’s so-called boyfriend is not just abusive. He is a Sicilian drug lord, a man dangerous and ruthless. If Ghost is to ever save the person who wreaked havoc on his heart, he has to make a deal with the Coffin Nails MC. But being a member is a destiny he’s always tried to avoid. And when a life of violence becomes too much to bear, he might be the one needing Luca to catch him when he falls. When it comes to men, Red Jack has three rules. The guy has to be hot, out of town, and not up for repeats. It’s a good way to keep the gay flings far away from the eyes of his brothers in the Coffin Nails Motorcycle Club, and he will make damn sure it stays that way. When a hookup takes an ominous turn, and the sexy stranger turns up at his house, the heat is on. Loki invades his life and just won’t leave, wreaking havoc wherever he follows Jack, but getting rid of him becomes harder with every kiss. For Jed, the Coffin Nails Motorcycle Club is family. With them, he learned how to think, what to enjoy, and how to fight, but there is one thing he knows his friends can’t find about. They would never accept him as gay, and so his life is a constant struggle with desires that fill him with despair. Only there is a much darker secret lurking in Jed’s heart. His feelings for his stepbrother, Ryder, go far beyond brotherly. Trapped with a yearning that can never be fulfilled, Jed spirals out of control and unwillingly puts the love of his life in danger.

But finding out what they feel for each other might only put them on a path to destruction. 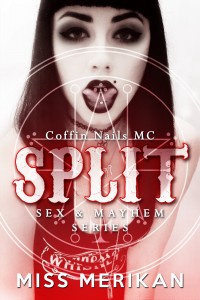 Hunter knew he was in deep shit when a patchover went sideways, ending up with his prez dead, and him and his cousin becoming live-in hostages at the Coffin Nails MC clubhouse. What he didn’t know though, was that the girl he fucked just a few days before was the Coffin Nails club president’s daughter, set on having nothing to do with him after a creepy one-night stand in an abandoned church. Tough luck, because Hunter is not a quitter, even if getting involved with the prez’s hot daughter could get him killed.

Astaroth is devastated after losing the two people closest to her and believes that a ritual described in her late mother’s notes might hold the key to bringing back the balance in her family. During the ceremony, she needs to get pregnant by the demon she summons, but why does he have to appear in the form of a handsome, long-haired, asshole of a biker, who just doesn’t know when to give up? She never intended to see him again, but there he is, a new member of her dad’s club. When a masked, bloodstained man rescues Misha from captivity, he doesn’t know if he should thank the menacing stranger or run. Grim is not the kind of man who takes no for an answer, and Misha might now be in more danger than when he was trapped as a sex slave. Misha cannot deny though that Grim is as alluring as he is frightening, and once Misha realizes what power his body holds over Grim, he understands that taming the beast of a man could be within his reach.

But any possibility of a future together is like a house of cards when Zero, the sadistic crime lord who destroyed Misha’s life, sets out to get him back. Will the ruthless biker assassin at Misha’s side be enough to conquer the monsters from his past?