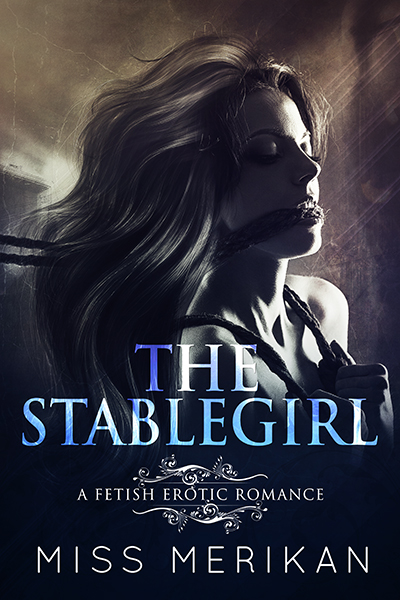 Now, Coal is leaving, after a year in service as a stallion, and Annie’s heart is breaking. If he is to go, she wants one last chance at truly connecting with Coal. What she doesn’t expect though is that after a night of passion, Coal comes back for her, and as Dante, buys her from her former master. She’d always imagined the life Coal led as a comfortable existence, but it is when she becomes Dante’s mare that she realizes there is much more to being a pony than she thought.

With Dante being Annie’s new master, she is thrust into a debauched world she never imagined existed, but she isn’t sure anymore if being his mare is what she truly wants. All she knows is that she wants her beloved stallion Coal back.

His voice made Annie shiver. She’d never feared him this much when he was Coal. They had an understanding back then. But now? How was she to navigate the situation with him being a man?

“Where should I put my things, sir?” Not that she had much. A blanket a friend knitted for her years ago, before she’d even met Jack, a small gas mask for just the bottom of her face, a pair of goggles too big for her, and a deck of cards.

He walked past her and opened the wardrobe to put back his suit jacket and accessories. “I think I should call you Crema. You have such a lovely, pale coat.”

Annie looked up into his eyes, unsure what to make of it. “Excuse me, sir?”

Dante frowned at her, his dark eyes flaming up with something she couldn’t read. When he put his index finger against her lips, she fought the sudden urge to kiss it and stayed silent. Pay attention to her surroundings and stay aware of danger was all she could do.

Slowly, he stepped even closer and turned her around to face away from him. Annie stiffened when he pulled on the belt of her apron and then pushed the garment off her. The way it fell to the floor had her stiffen. A part of her did want to repeat the sex they’d had a few days ago, but it felt as if it had been a different life, a different man.

“Hush, Crema,” said Dante. He put one of his large hands on the front of her neck, and as she opened her mouth, gasping, he gently pushed something between her teeth. It was rubbery, with something hard inside.

Now it finally clicked. After a year spent with Coal, she knew exactly what this was. A bit. He shushed her with a bit! This couldn’t be really happening. Sure, she’d said she wanted the life he’d had, that she’d wanted to be his mare, but the fantasy was getting all too real. Before she could fight against it, Dante closed the halter the bit was attached to at the back of her head. She was left with a little whimper for protest.

“Shh, easy, girl. It’s all right,” he said softly as he pulled her against his warm chest. His hands squeezed around her waist before trailing up her chest.

Annie’s breath quickened once his hand reached her breasts. He’d never touched her there before. That is … he did nuzzle her, but never like this. Coal would always get only as much as she would allow. Dante? Dante took whatever he wanted. But it seemed that he did want to keep her. Annie’s head spun. He didn’t just keep her. He owned her. He named her.

“The pony play in here is quite fabulous.  It’s well done with exquisite detail of play mixed in with heartwarming emotion.”